Rippl-Rónai and Maillol at HNG

There is a very interesting travelling exposition currently in Budapest at the HNG (Hungarian National Gallery, called MNG in Hungarian, or Magyar Nemzeti Galéria). Unlike most expositions, the theme of this one is of the fruitful friendship between two artists and their story, the way that they influenced each other’s work, and how they influenced each other, sometimes a thousand miles from each other. This exposition is about the friendship between József Rippl-Rónai and Aristide Maillol.

The Hungarian National Gallery alias HNG (or Magyar Nemzeti Galléria alias MNG, as it is called on its website) is one of the biggest and oldest museums and galleries in Budapest. It is located in the Buda castle, in the Royal Palace, one of the most extravagant buildings in the city. It’s top notch location makes it a lot of fun to visit, and since it is located in the Buda castle, you can make visiting it a part of a trip to the Fisherman’s Bastion, the castle and the labyrinth,and soak in some culture on the way, but the museum is plenty big enough that you can spend an entire day just going from room to room, checking exhibitions, and still not get to the end.

The friendship between these two great artists started in Paris in 1890, when both were up and coming, struggling young artists. The next ten years saw both of them turn into acknowledged artists and accepted figures of the art world, although in very different respects: Riipl-Rónai became a revolutionary in the world of painting, while Maillol became an influential sculptor. Rippl-Rónai left Paris in 1902, and both of them started to get quite famous at that time. Maillol became one of the most influential sculptors of his time, and Rippl-Rónai gained world fame from his home in Hungary. The two never stopped being the best of friends, exchanging letters and even dedicated works of art to each other,sometimes even in each other’s style. This friendship and the works of love that were born out of this lifelong friendship that greatly influenced each other’s art is the focal point, and each piece of the exhibit tells a story about this amazing relationship. 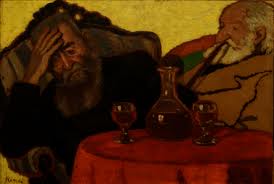 The exhibit will be in Hungary until April 6th, and since this is the home of Rippl-Rónai, there will be some pieces of work that can only be viewed during the time the exhibit is in Budapest, so it is well worth seeing it here. The centerpiece of this exhibit, the painting that Rippl-Rónai made of Maillol was last seen in Budapest in 1936, and is a real treat for history buffs as well. The exhibit also will have never before seen graphite compositions made by Rippl-Rónai when he was a part of the Nabik circle in Paris, in the late 1800s, a real treat. Available with audio guide, and kid friendly as well, this exhibit is definitely worth visiting even if you are not a big fan of museums.