Docked on the Buda side, on the waters of the Danube, can be found the ‘A38 Ship’, one of Budapest’s hottest venues. The ship, originally called Artemovsk 38 is a decommissioned Ukrainian stone hauler from 1968 that has reopened its doors as a nightclub in 2003.

Once converted, the ship became a 3,000 m² nightclub on the waters. After boarding you can choose between three floors: the roof-top terrace, the restaurant, and the concert hall. The restaurant can accommodated 120 people. Meanwhile in the concert hall, located in the belly of the ship, the former cargo space, 600 people can enjoy Budapest’s best and hottest parties. 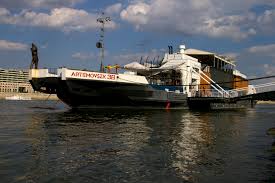 A38 is primarily a music venue. In addition to the best parties, the club offers the best of live international beats, the greatest gigs in Budapest. The concert hall and the summer stage on the terrace have carried countless well-known artists and bands from almost all genres of the world, including but not limited to pop, rock, metal, alternative, electro, folk, jazz and progressive styles.

The legendary ship-cum-club is unique to not only Budapest, but to whole Europe. It is considered the venue to give home to the hottest parties and gigs in Budapest. Visitors can even enjoy the amazing, lit-up panorama of South Pest, the Millennial Culture Centre, the Palace of Arts, and the National Theatre from the deck. No wonder it has been called the best venue of town by many locals and tourists.

In 2012, according to contemporary music-centred Electronic Beats’ readers’ poll, A38 Ship has been picked as the best venue of the world. Budapest’s floating venue topped the list, ahead of Berlin’s Berghain and New York’s The Silent Barn, as the best place to party in the world. 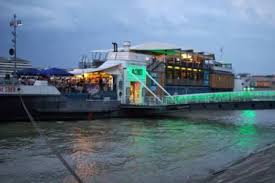 Good to know before you go

A38 has altogether five bars: concert hall, bow bar, motor bar, roof and bow terrace. All the bars offer a wide range of drinks - from excellent wines, beers, shots and cocktails to the inevitable selection of Hungarian palinka. Prices might be a little steep for locals as they are set to the Western European standards, but they will come as no surprise for foreigners. 2-4€ for beers, 12-14€ for a bottle of wine, and 3-6€ for a shot of palinka.

In the following months, the A38 ship will host the British Little Boots (April 23), local indie band The Moog (April 30), the rabbit-masked slowcore Danish band Sleep Party People (May 5), the Californian straight edge hardcore band Stick to your guns (May 13), the American neosoul singer Akua Naru (May 21), the Anglo-Saxon electro super-trio The Acid (July 23) and many, many more Hungarian and international talents.

For more to come and more information check out the website, and enjoy Budapest’s hottest parties and gigs on the A38 Ship.