Gyros Stands: An Oasis In The City

Döner kebab, falafel, ayran, and a bunch of other foods that no one ever orders; this is the basic menu for thousands of gyros stands across Europe, and Budapest is no exception. These places are an oasis when everything else is closed, and you have the munchies at 2 am. Budapest can boast nearly a thousand of these establishments, mostly maintained in and around the party districts of Budapest. With döner for around 2 euros, and a platter for 3, a meal can be had at these fine establishments for pocket change. Here are some of the more famous stands in the city, but most gyros stands in the 6th and 7th have a remarkably similar repertoire. Here are some of the highlights.

Istanbul kebab is a chain of fast food restaurants. They all provide the same food for the same prices, anywhere in the city. They have discount prices, with gyros being just 750 forint. These places also tend to serve pizza as well, having the junk food market pretty much cornered. They also serve traditional Turkish cuisine next to the usual fast food variety, which is also worth a mention, and which consists of more than just gyro meat in a wrap. Check out their awesome lentil soup, perfect on a hot day and full of protein! 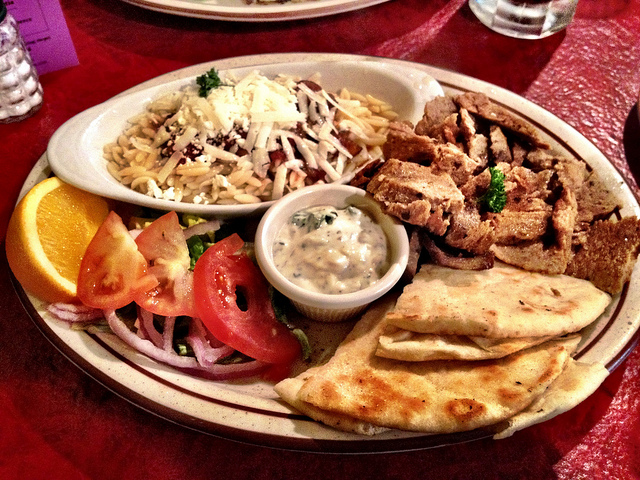 Star kebab is the other chain that is all over the city, and to be able to compete with Istanbul they do what any rational enterprise would do; they offer a slightly different deal. They focus on grilled meats, and on traditional ways of preparing saslik and kebab. Kebab is the big pile of meat that is commonly referred to as gyros meat, while saslik is basically pieces of meat on sticks, cooked above an open fire. They make it with several different kinds of seasoning, and they are all quite good.

Szeráj is a restaurant, and it was one of the first Turkish restaurants in Budapest, when gyros were still considered a “greek thing”. It is located across from the National Theater, near the Pest side of the Margaret bridge. The place is 2 stories, has a long self serving food bar, and has a wide variety of Turkish cuisine. Their lahmandsun, or Turkish pizza is absolutely to die for, and their oven baked rice pudding is also a gift of the Gods themselves. Definitely worth a shot, and the place is iconic, and is a standard Budapest experience.